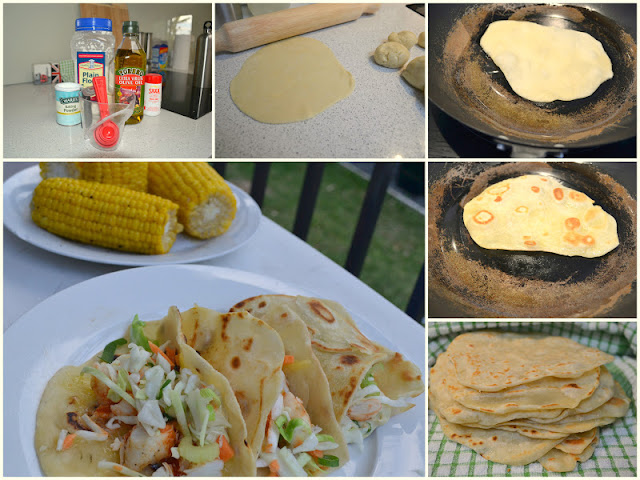 I love most Mexican food and was pretty depressed when I realized that and are way behind the curve when it comes to providers of Mexican treats. I did find a bottle of Cholula Hot Sauce at the local market and decided to take matters into my own hands and have a bit of a fiesta by putting Cholula on everything edible.
I had already decided to make Shrimp on the Barbie! and was left to decide what I was going to do with BBQ’d shrimp slathered in . Years ago when I was in Mexico on a family vacation the absolute best thing I ate was garlicky shrimp wrapped in a flour tortilla sold by this little old lady in any alley between two buildings. Dreaming of that wrap I decided I was going to make shrimp tacos.
My primary concern was that store bought tortilla shells were not going to do my shrimp justice. I also wanted smaller diameter tortillas so that I could justify eating a plateful of them. The only solution would be to venture down the path of making my own Tortillas!
It turns out that it is really easy to churn out amazing flaky soft Tortilla shells with minimal effort and maximum food hero-ness. I vow to never buy Tortillas ever again! I am close to saying that these are the absolute best thing I’ve ever made but I did make a pretty amazing plate of“Ants on a Log” a while ago.
Ingredients:
- 3 cups Plain Unbleached Flour
- 1 teaspoon Salt
- ½ teaspoon Baking Powder
- 1/3 cup Olive Oil
- ½ - 1 cup Hot Water
Directions:
Mix flour, salt and baking powder together. Add the olive oil and mix together until it is the consistency of fine crumbs. Add the water and mix until it starts forming a ball. Cover with plastic wrap and let rest for 30 min or so.
Divide the dough in to 10-15 balls and roll out into thin discs. Cook at medium/high heat in a dry non-stick skillet. (I used a little oil because our skillet is so crumby). Cook partially on one side, flip and cook fully on the second side then flip back to the first side. This will cook the tortilla more evenly and make it fluffy and flakey.
You can wrap anything in these shells. They would be good with jam and peanut butter or more savory things like the tacos. I think the next time around I will make quesadillas. Enjoy! 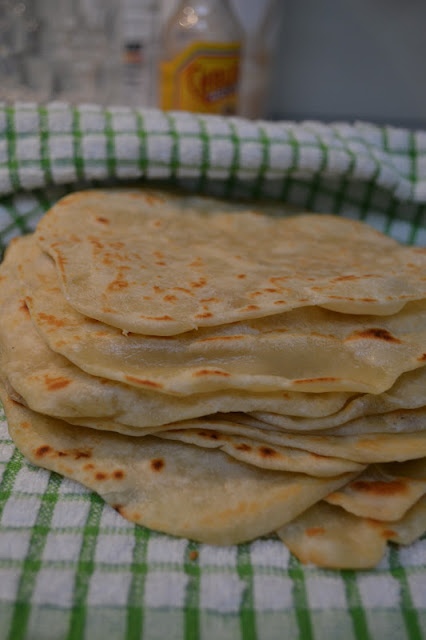